Europa Nostra puts the Greek Orphanage on a short list 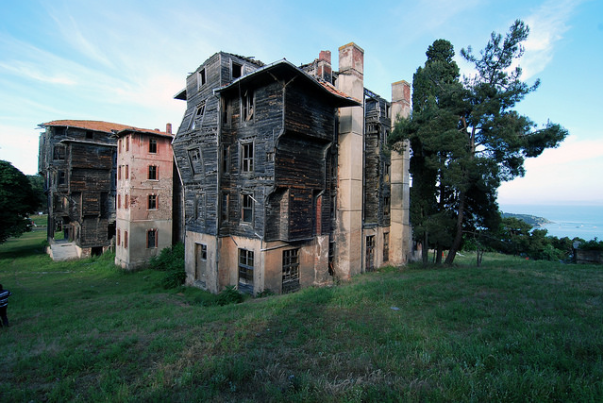 The Greek Orphanage on Büyükada, formerly Prinkipo, largest of the Princes Islands, is one of 12 heritage sites shortlisted for the ‘7 Most Endangered’ programme for 2018, just announced by Europa Nova, at the start of the new European Year of Cultural Heritage.

The story of the Greek Orphanage, built in 1898 as a luxury hotel but denied a licence, is told in Cornucopia 53, the last of the magazine’s four-part guides to Istanbul, with features, listings, maps and wonderful photographs of the islands by Monica Fritz and Brian McKee. Long-time resident of Büyükada, writer Owen Matthews, who was married in the magnificent Cathedral of Aya Dimitrios, seat of the Greek Bishop of Prinkipo, describes year-round life on the islands, which have attracted royalty, exiles, as well as summer visitors from Istanbul. The Orphanage is described by Europa Nostra, who run the Most Endangered programme, as the largest wooden structure in Europe. The five-storey building has been unoccupied since 1964, and suffered some fire damage in 1980, and is in urgent need of repair