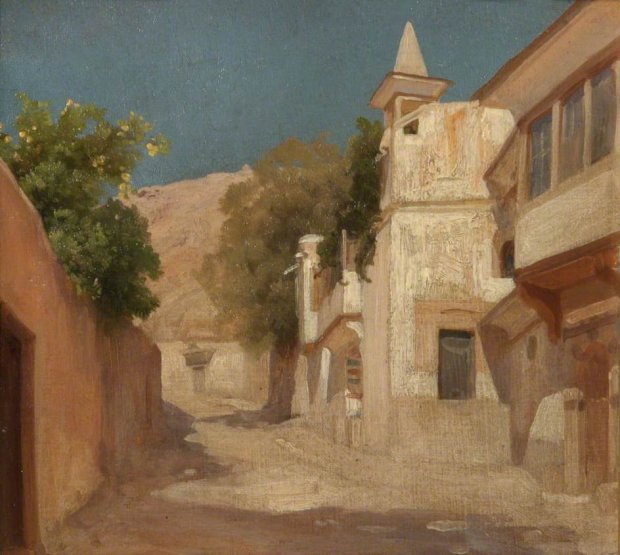 This small painting by Frederic Leighton of Sir Richard Burton’s house in Damascus is one of the delights of a new display about the diplomat and traveller at Orleans House Gallery in west London. The aristocratic Palladian villa now holds the Richmond upon Thames Borough Art Collection, and Burton memorabilia is on display in a new Study Room. Here are a number of photographs of Burton, as well as his fez, the curly-toed slippers he reportedly wore at Mecca (below), a cast of his hand and foot, and a gun of his own invention. Oddly, there is also a single carved clog: Burton apparently spent years trying to find a replacement for one that he lost, but cobblers everywhere were superstitious about making a single shoe. 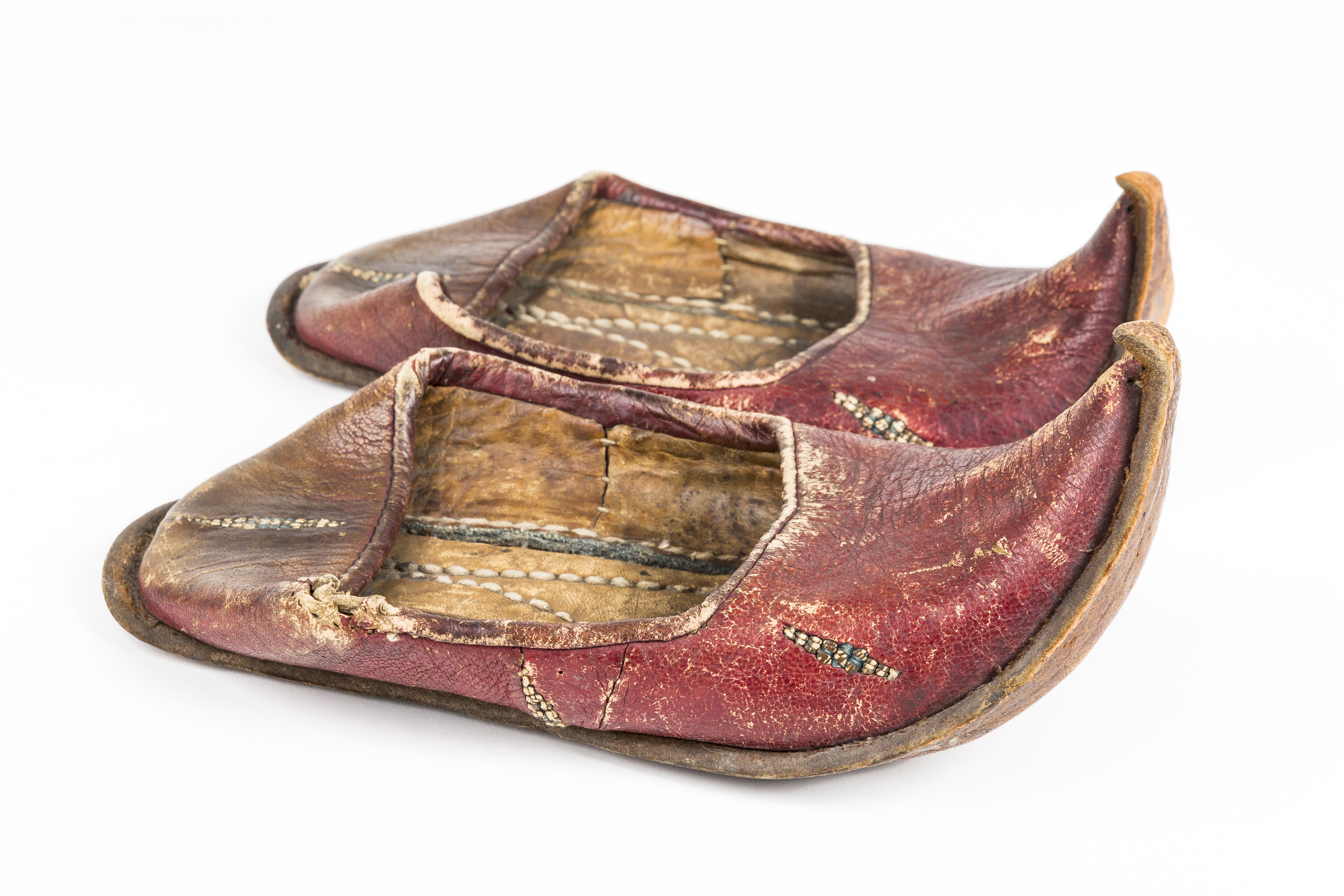 Burton and his wife Isabel travelled unescorted to Palmyra while in Damascus, and according to a Local History Note in Richmond’s archives, this was one of the happiest periods of their lives. In describing the house in the El Salahiyyah suburb, Isabel wrote:

“As soon as I had arranged our house at Damascus, the first thing I did was to indulge in my hobby of collecting menagerie. First of all we bought some horses. Then I bought a camel and a snow-white donkey, which latter is the most honourable mount for grand visiting. I also picked up a splendid Persian cat in the bazaars, and I had brought over with me a young pet St. Bernard dog, two brindle bull-terriers and two of the Yarborough breed, and I added later a Kurdish pup. I bought three milk goats for the house, and I had presents of a pet lamb and a leopard. I added to my family also from time to time half-famished dogs which I had also rescued from the streets, or ill-treated and broken-down donkeys… It became a truly wonderful gathering.”

Leighton stayed with the couple in Damascus and he sought Burton’s help sourcing ceramics for his home, Leighton House in Kensington. Leighton’s portrait of Burton is in the National Gallery collection, where it is described as “capturing his slightly brutal character very effectively". Orleans House also has copies of A Thousand and One Nights. Burton completed its translation when he was later posted to Trieste. A number of small paintings by Albert Letchford of the interior of his house in the Habsburg port are part of the Orleans House Gallery display. Letchford also painted 70 illustrations in oils for Burton’s A Thousand and Once Nights. An 1897 first edition fetched £2500 at Christie’s London in 2012.

Burton was the British consul in Damascus from 1868 to 1871, before being reassigned to Trieste. “He thought Trieste preposterously unworthy of him,” Jan Morris writes in her last book, Trieste and the Meaning of Nowhere, pointing out that his ideal foreign country was “a haggard land infested with wild beasts and wilder men, a region whose very fountains murmur the warning words, ‘Drink and away!’”
Burton died in Trieste and is entombed with his wife, Lady Isabel, in a tent-shaped marble mausoleum in St Mary Magdalen Roman Catholic Church in Mortlake. Lady Isabel, who desighned the mausoleum, left the Burton collection to the nation.

The Richmond link goes back to Burton's school days when his parents took a house in Maids of Honour Row, just across the Green from the Richmond Academy where he went to school. The exhibition is on permanent display in the Study Gallery at Oreleans House Gallery, open Tuesday to Sunday 10am–5pm, free admission.