Store > Books > The Fisherman of Halicarnassus 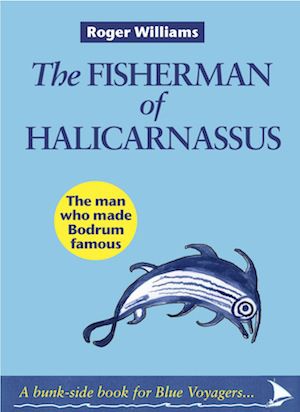 The Fisherman of Halicarnassus

The man who made Bodrum famous

By Roger Williams
Published by Bristol Book Publishing
Out of Print

Pocket book, 140 pages OUT OF PRINT

‘If you are heading for the Turkish coast this summer, this curious, informative and entertaining little book will sit well beside the bunk’
The Sunday Times

Cevat Şakir Kabaağaçlı, known as the Fisherman of Halicarnassus, was the founder of the famous Mavi Yolculuk ‘Blue Voyages’. A historian, humanist and ecologist, Halikarnas Balıkçısı was one of Turkey’s most popular writers and has been described as a modern Homer.

Taking the lead from the Fisherman, who was Turkey’s first professional tourist guide, this book explores the fascinating history and culture of these magical sailing waters.

The Fisherman of Halicarnassus is the perfect companion for a sojourn on Turkey’s Aegean and Mediterranean shores.

Reviews for The Fisherman of Halicarnassus

“If you are a first-time visitor to Bodrum and you want to quickly get acquainted with the local history and culture, this is the perfect book for you.” – Goodreads

Forty years after his death, Cevat Şakir Kabaağaçlı, the “Fisherman of Halicarnassus”, remains a figure of reverence in Bodrum. The main street carries his name, quotations from his work adorn billboards, a small museum dedicated to his memory has recently opened in Bodrum Castle, and his bronze bust stands outside the Belediye, surveying myriad gulets in Bodrum harbour. He is remembered as a novelist, a raconteur and a pioneer of the mavi yolculuk, the “blue voyage”.

For non-readers of Turkish the cult of the Fisherman has always been difficult to share, as so little of his work has been translated –not even his autobiography, Mavi Sürgün (The Blue Exile). So this very readable book, though less of a biography than a broader celebration of Bodrum and the Turquoise Coast, is welcome.

Cevat’s life was colourful, to say the least. Born in 1890 into a prominent Ottoman family (his father was Mehmet Şakir Pasha, a historian and diplomat; his uncle, Ahmed Cevat Şakir Pasha, grand vizier from 1891 to 1895; his mother a Cretan child-bride), he studied at Oxford then in Rome, returning to Turkey in 1913. But the following year he was convicted of shooting his father and sentenced to 14 years in jail, but released after seven. In 1925 he again found himself on the wrong side of the authorities (now those of the Turkish Republic) and was sentenced to three years’ internal exile for seditious writing. He had the good fortune to serve the first half of this sentence in Bodrum, where the Castle, which would normally have been his jail, was uninhabitable owing to shelling by a French battleship in 1915. So Cevat lived in a small fisherman’s house on the beach, obliged simply to report to the police daily. Internal exile can seldom have been so agreeable.

Enchanted by his new home, he stayed for most of the next 30 years. The climate, the beauty of the sea and of nature, the hospitality of the inhabitants, and their tolerant, broadly secular outlook on life, appealed to him. He saw Bodrum’s population as heirs to an Anatolian civilisation thousands of years old and developed a personal philosophy of Blue Anatolian Humanism which saw Anatolia as the true home of Mediterranean culture. He bought a small boat and would explore the coast, pulling up in convenient bays and sleeping under the stars.

Bodrum was far from a typical village in southwest Anatolia at the time. Around half the population were Cretan Muslims, who had come to Bodrum as refugees in the early years of the century and then through the Exchange of Populations of 1923. The Cretans were seafarers; it was their culture Cevat found inspiring, and that is the subject of most of his novels and short stories. How this reality fits with Blue Anatolian Humanism is not clear, but the Fisherman was not a man to be troubled by inconvenient detail.

Cevat Şakir can be compared to European writers of the same era, who described life in other parts of the Mediterranean or southern Europe – such as Gerald Brennan in Spain, or Carlo Levi, exiled to Eboli in southern Italy. But until more of his work is published in other languages he will remain something of an enigma for non-Turks.

This book is about more than the Fisherman of Halicarnassus. It is a celebration of this coast and aspects of its history. It is a delightfully eccentric mix of the author’s and the Fisherman’s enthusiasms – underwater archaeology, sponge diving, Herodotus, ecology, tombstones, gulets, Homer’s Odyssey… And it will enhance the holidays of the thousands of people who now take their own mavi yoculuk every year in comfortable gulets.