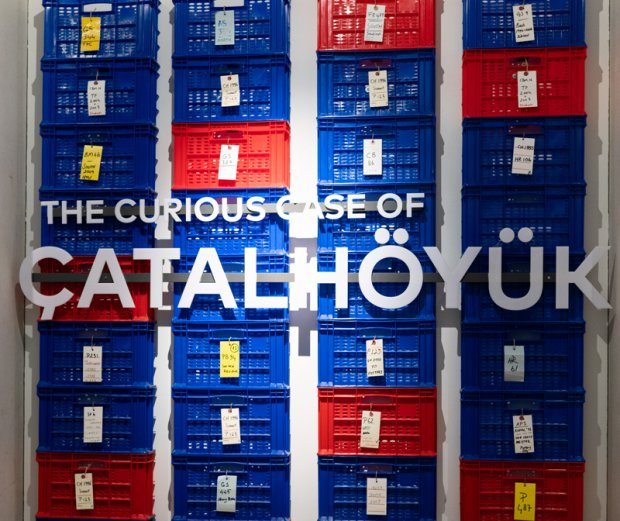 It caused excitement when it was discovered by the late James Mellaart in 1958, and Çatalhöyük is causing excitement today, with a hi-tech exhibition to mark the end of the recent 25-year research project at the Neolithic site.  Sponsored by ANAMED (Koç University Research Centre for Anatolian Civilisations), The Curious Case of Çatalhöyük (Çatalhöyük: Bir Kazı Hikayesi) had its dates extended twice through public demand when it was on show earlier this year in Istanbul. Now it has arrived at SOAS’s Brunei Gallery, where it was opened by the newly appointed Turkish Ambassador to London, Ümit Yalçın.

This exhibition has no actual found objects, but through technological means shows the archeological process, from trowel to a virtual reality tour of the 9,000-year-old, UNESCO site on the  Konya plain. The project has been carried out under Professor Ian Hodder, continuing the work of Mellaart whose discovery of the city was featured in Cornucopia 19, which published his copies of the astonishing wall paintings.

Bristol-born Hodder is now attached to Stanford University and is known for developing “postprocessualist” theory of archaeology, with advanced research methods and laboratory collaborations. The displays include 3D prints of finds, such as an 8000-year-old 11cm female stone figurine, laser-scanned overviews of excavation areas, digital displays and an avatar of Hodder himself to answer questions. An “immersive digital sculpture” (pictured below) specially commissioned for the exhibition from the artist Refik Anadol took 2.8 million data records from 250,000 finds and turned them into a video of captivating abstract kaleidoscopes that have no visible connection to Catalhöyük.

In a laboratory area, tables with microscopes, calipers, tweezers, brushes, beakers, pipettes, tape and glue, show the ways in which items are analysed, from human remains to ceramics and other materials. More prosaic are the scores of red and blue plastic crates on the walls .

“They are apple crates,” says, Duygu Tarkan of ANAMED, who curated the exhibition. “The labels are copied from the real ones from the site.” Diary notes written up every day by each member of the team of field archaeologists can be read. The site provided accommodation for the 100 to 130 during their three-month summer seasons. “Except for one day a week, when a bus was laid on for visits to Konya, there was nothing for us to do but get on with our work,” Duygu says. “When something was found, the news quickly spread.”

ANAMED believes that this hi-tech exhibition, with no found objects, points the way in which archaeological exhibitions may be displayed in the future. The exhibition is on until December 15,10.30am–5pm, Thurs until 8pm, closed Mondays. It then travels back to Turkey to go on display in Ankara.