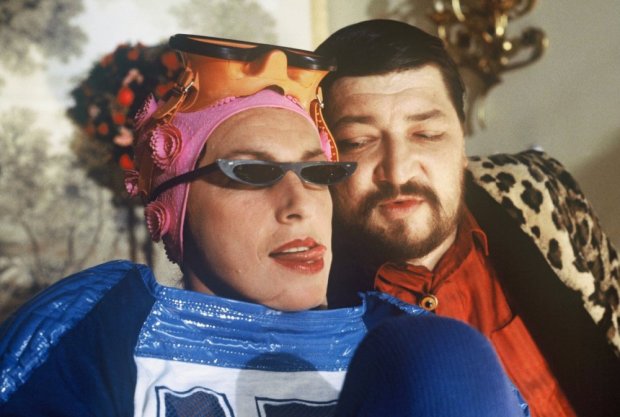 This week, I walked into a movie blind.

The !f Istanbul Independent Film Festival is ongoing through this weekend, and I’ve been determined to catch as many film screenings as I can fit into my schedule. This time, I showed up at the cinema alone and in ignorance. I hadn’t really researched the film I was about to see, and I know little about German cinema, so when the screen flashed the first frame of Kamikaze 1989, I wasn’t at all prepared for the wild ride I was about to be taken on.

Even with that dearth of previous knowledge, I was surprised by how tricky it was to determine when exactly it was made; though every frame positively screamed ‘80’s, the style seemed knowing and purposefully exaggerated rather than inadvertently kitschy. There’s that prophetic title: the film is set in 1989, a near-future cyberpunk fantasia where all societal problems have been ‘solved’ in Germany (the weather woman, broadcasting from a smoky club bathed in pink light, declares every day that the weather is perfect, no clouds, sun sun sun! though we see that in reality, the heavy gray German sky remains constant). The filmmakers couldn’t have known that 1989 would see the fall of the Berlin Wall, the reunification of Germany, and the slow crumble of communism behind the iron curtain. 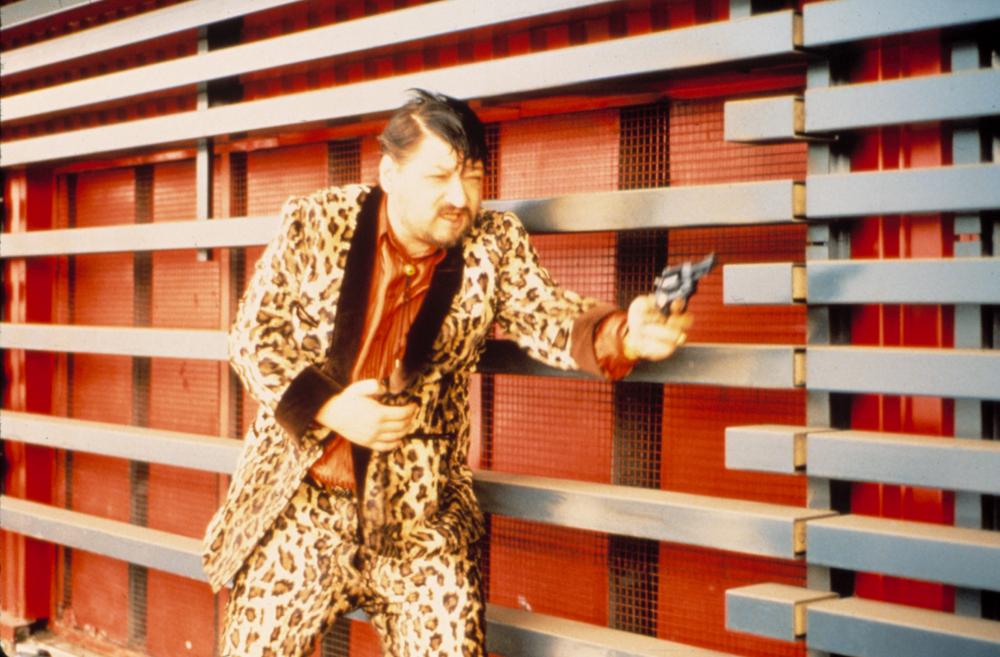 We meet Police Lieutenant Jansen (Rainer Werner Fassbinder in his final role) in the ‘police disco’, sweating through his gold-trimmed racquetball outfit as he whacks a ball in time with the electro groove of Tangerine Dream. Soon he’ll change into the clothes he lives in for the rest of the movie: a loud leopard-print suit, coral collared shirt, an underarm gun holster for his furry leopard-print gun, along with a camera ring and an ever-present cigarette. He is a buffoon, but he is our buffoon, and he reminded me of a bizarro version of Robert B Parker’s Spenser or Michael Gambon in The Singing Detective or a film noir gumshoe: the only moderately sane person in a mad world.

The plot is borderline incomprehensible and completely unimportant. It has something to do with a vaguely dictatorial corporation known as The Combine, run by a evil man with a weak chin known as The Blue Panther, and a fake bomb threat in their building; Jansen is given four days to unravel the hoax. There’s something about a mysterious 31st floor and subversive ‘politicos’ and lingerie-and-gas-mask-clad assassins, as well as the looming spectre of The Blue Panther’s arch-nemesis Krysmopompas. Who is Krysmopompas? Who cares? The film doesn’t. 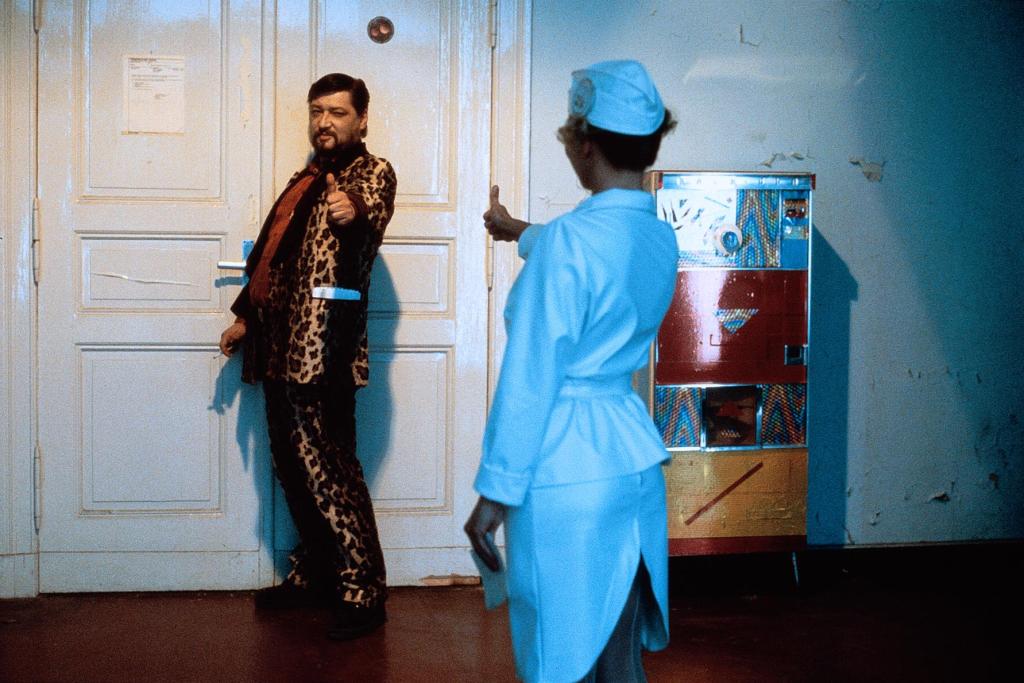 Instead, this is a movie delighted with the stylised world it has created and small moments of absurdity that exist there. The police department salute each other with an emphatic thumbs-up and the camera lingers on their extended fingers. The Combine broadcasts a laughing contest that involves deranged-looking people trying to laugh the longest while on display in what seems like burlesque cages, and their demonic giggling blaring from televisions weaves in and out of scenes. (An employee of the Combine notes at one point that the show is watched by 99.3% of all households.) The strains of Rossini’s opera buffo overture to The Barber Of Seville punctuate the action, along with that pulsating Tangerine Dream soundtrack.

The grungy neon aesthetic brought me back to the days in my early 20’s when I lived in Prague and spent time lurking in the ruin pubs and funky dives around Eastern Europe. At the end of the movie, I furiously scribbled down a list of the influences and aesthetic echoes I saw in this movie: Blade Runner, of course, alone with A Clockwork Orange and mid-century Boston architecture and One Flew Over the Cuckoo’s Nest and Akira. But then, I noticed in the credits when this film was made. It’s from 1982, the same year as Blade Runner (at least, the original cut of Blade Runner) and predating Akira, as well as the events of 1989. I was shocked. And completely thrilled. 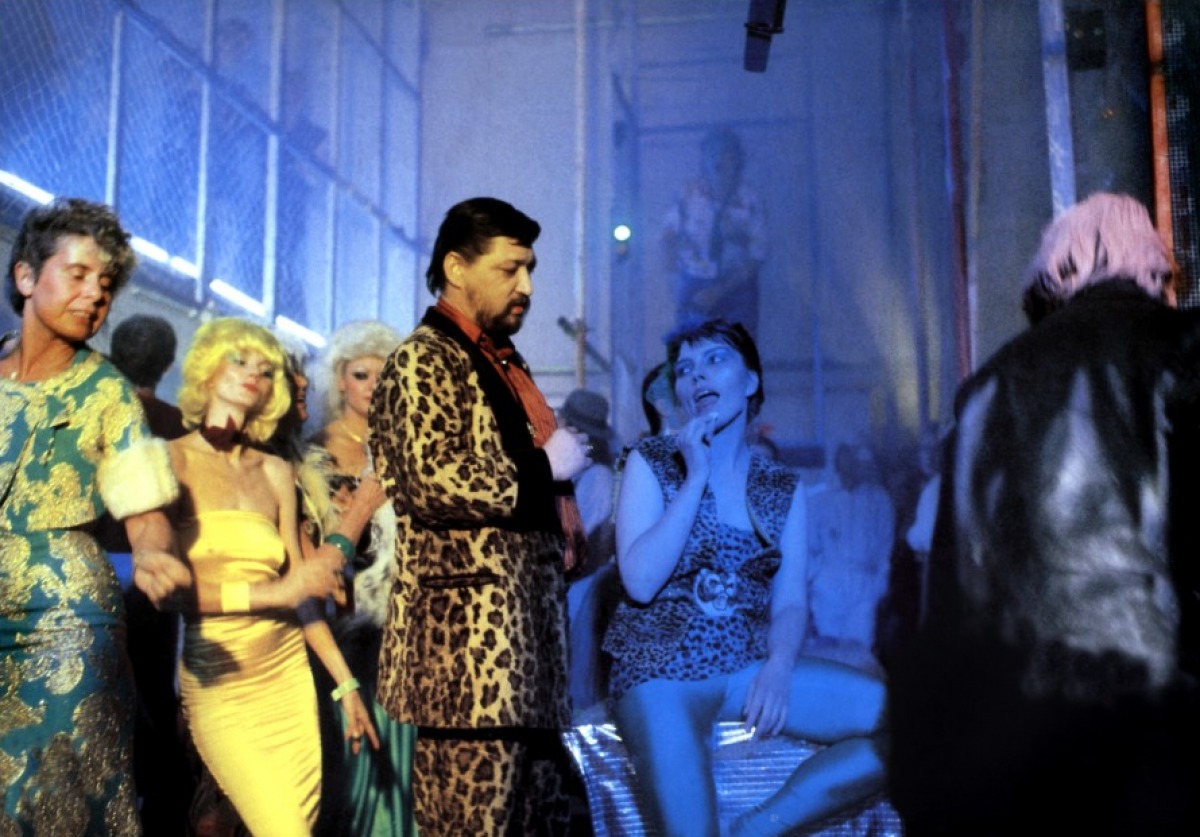 It’s a special treat to be surprised in the cinema, something that happens to me less and less frequently with the proliferation of information online. Of course, if I’d done my homework I might have been better prepared for what I was getting into, but the thrill of blind discovery left me elated. This was the second and last showing of Kamikaze 1989 at the film festival— if you want to seek out this delightful movie (and you should!), you’ll likely have to look online— but with such a rich programme of films through the weekend, you’re almost guaranteed to find your own surprise in the cinema. I’ll be there, waiting to be delighted again.

You can find the schedule for the !If Istanbul Independent Film Festival here.