Painting his way into history

At home with the last Caliph

The dashing Abdülmecid Efendi was the last member of the Ottoman dynasty to hold court on the Bosphorus. This enlightened, sophisticated man with a passion for painting, son of a Sultan and cousin of the last Sultan, spent two brief years as Caliph. But in 1924, the caliphate was abolished and Abdülmecid left the city his family had captured five hundred years earlier for exile in France. His paintings, abandoned in the very studio of his house on Çamlıca Hill where he had created them, are a remarkable pictorial legacy of the last days of empire. By Philip Mansel. Photographs by Fritz von der Schulenburg

That Istanbul has a full record in pictures of its last years as an imperial capital is thanks to two painters: the Italian court painter Fauso Zonaro and the Caliph Abdülmecid, who, because of the political turmoil of those years, died in exile.

That Istanbul has a full record in pictures of its last years as an imperial capital is thanks to two painters: the Italian court painter Fausto Zonaro and the Caliph Abdülmecid, who, because of the political turmoil of those years, died in exile. The most intelligent and cultivated prince of the Ottoman dynasty, he was a frequent visitor to Zonaro’s studio and one of his greatest admirers. They shared many friends, such as the archaeologist and artist Osman Hamdi Bey and the politician and soldier Enver Pasha, and both supported the Young Turk revolution. Born in 1868, a son of Sultan Abdülaziz (1861–1876), and first cousin of Sultan Abdülhamid, Abdülmecid had received an education in both traditional Ottoman and modern French cultures at the princes’ school in Yıldız Palace. In 1895, on the death of the previous owner, the ex-Khedive Ismail of Egypt, Sultan Abdülhamit bought for his first cousin Abdülmecid an estate below the isolated, wooded Çamlıca Hill, on the Asian side of the Bosphorus. It was, by intention, far from Istanbul and Yıldız, and there the kiosk that bears Abdülmecid’s name was constructed.

The kiosk’s architecture and decoration mirror the cosmopolitan character of Istanbul. The architect, Alexandre Vallaury – born in Istanbul in 1850, the son of an Italian baker – had studied at the Ecole des Beaux-Arts in Paris. He subsequently became the most fashionable architect in Istanbul and taught generations of Turkish architects at the Academy of Fine Arts, founded in 1883.

The kiosk is an imposing two-storey wooden structure, built in the shape of a Maltese cross and resting on a stone basement. It is a nineteenth-century reinterpretation of traditional Ottoman designs and motifs. Its external decoration of neo-Ottoman and neo-Moorish polychrome painted panels of flowers and arabesques gives it an unusual and colourful appearance. The decoration was repeated on the inside, with neo-Mameluke arches and columns and brightly coloured Ottoman tiles on the walls. The tiles are from the workshop of Mehmet Emin, who pioneered the revival of the manufacture of traditional Turkish tiles at Kütahya – a sign of a growing pride in Turkish culture in the late Ottoman Empire.

The interior, too, was a sumptuous blend of East and West. Modern chairs, sculpture and a grand piano were placed alongside neo-Islamic inlaid furniture, a Koran stand and an arabesque-style chandelier designed by Abdülmecit himself. In the garden, in accordance with Ottoman tradition, there was a separate building where the family and the women of the household slept. This, along with other auxiliary buildings, has now disappeared. The family used to walk through the park, gardens and orchard to spend the day in the kiosk. The grounds were surrounded by a high wall. The imposing principal gate, designed by Abdülmecit, bears the inscription “There is no victor but God”.

Abdülmecid’s kiosk was, however, almost as much of a prison as princes’ apartments had in the past been in Topkapı. His cousin, Abdülhamid, autocratic and suspicious, forbade him to visit Istanbul. In his years of enforced leisure Abdülmecit wrote poetry, practised calligraphy, read the works of Victor Hugo and cultivated his garden. He boasted that the goldfish in his pools could recognise the sound of his voice when he came to feed them. At once cosmopolitan and patriotic, he learnt to speak French and German almost as well as Ottoman Turkish and Persian.

He also became a good musician, playing the piano, violin and cello, often with his wife, and composing both classical Western music (like many Ottoman princes and princesses) and Turkish music. In her introduction to the recent work on Abdülmecid Efendi, Günsel Renda writes: “His music library was of rarely surpassed scope, containing a vast collection of written music and books of both Western and Turkish musical theory, and demonstrates the full extent of his musical culture. Regrettably most of his own compositions are now lost.” 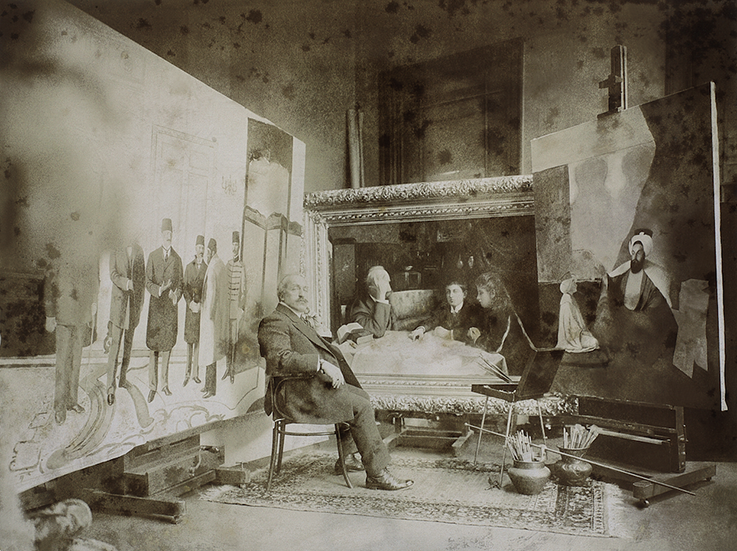 Abdülmecid Efendi in his studio. He painted historical scenes with a strong political message. ‘The Deposition of Abdülamid II’, left, celebrated his cousin’s fall

Painting was another favourite occupation. He had a studio in his kiosk and took lessons from a favourite of Abdülhamid, the director of Imperial museums and Ottoman orientalist Osman Hamdi Bey. An admirer of both the Western paintings and the Ottoman calligraphy panels hanging in Ottoman palaces, he was able to paint in both styles. Surviving works include pictures of zeybeks, the village guards who protected the mountain passes on the Aegean; a palace coffee server; Sultans Selim I, Murat IV, Selim III and Mahmut II; and his own father, Abdülaziz, on a white horse. Though Abdülmecid was not a professional painter – in some pictures the hands are mere lumps – he none the less painted with vigour. Moreover, his pictures are historical documents, reflecting the educated elite’s interest in both Turkish and French cultures.

In politics Abdülmecid sympathised with the Young Turk enemies of his cousin Abdülhamit. One of his most famous pictures, in a style like that of the Parisian Symbolists, was entitled The Fog. This political picture was an attack on Abdülhamit, inspired by a poem of the same name by Tevfik Fikret, comparing Istanbul under Abdülhamit to a senile sorceress, shrouded in a fog of hypocrisy, jealousy, greed and dishonour. No longer the “queen of the world”, it had become the “whore of the world”. Inscriptions on tiles in the kiosk also have a critical tone: “The leader of the tribe is he who serves the tribe”; “He who is learned has the highest rank”; and, prophetically, “The powerful do not know that their palaces are sometimes destined to be a sparrows’ nesting place.”

After Abdülhamid was deposed in April 1909, Abdülmecid was so overjoyed that he executed a painting depicting the moment when, in Yıldız Palace, four deputies of the Ottoman parliament informed the Sultan of his deposition. To give the picture authenticity, the deputies in question (an Albanian, a Jew, an Armenian and a Laz) were summoned to sit for him in his studio. The only picture of a monarch’s deposition painted by a member of his dynasty, The Deposition of Sultan Abdülhamid II illustrates the proverb “Revenge is a dish best eaten cold”, and reflects the bitterness of power struggles within the Ottoman dynasty between traditionalists and modernisers, supporters of absolute or constitutional monarchy…